Hi! My name is Alvin Motilla and I’m the author of VideoAuteur.com. :-)

I don’t know exactly why you want to know more about me. I’m not that important. ;-)

Anyway, since you’re here already, here I am with my daughter, Mariel… 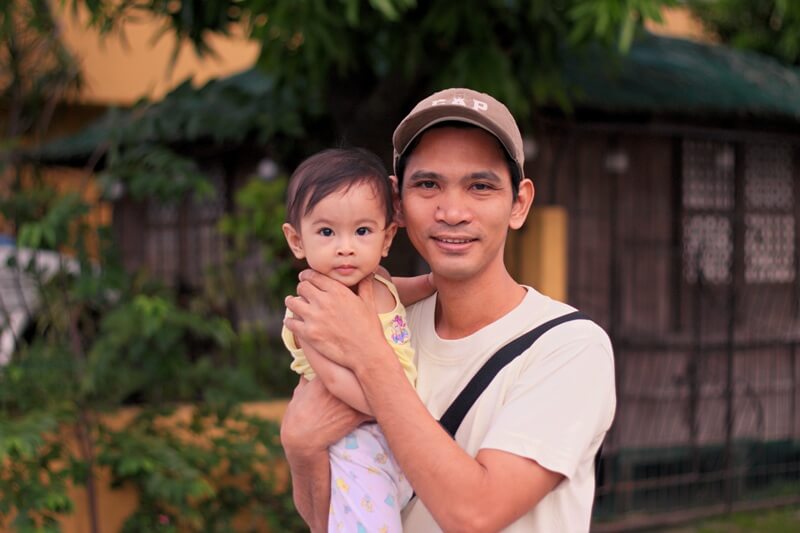 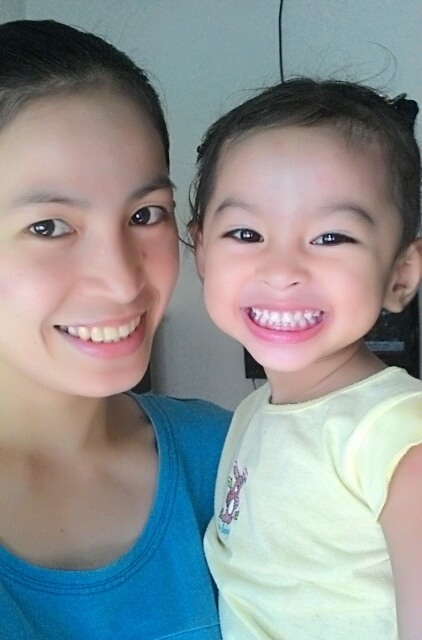 I told my wife to frame her subjects well, when taking selfies. But I still used this picture because I love their smiles. They’re so natural and beautiful. :-)

And here we are as a family. A day in our life. Quality time together…

In case you’re wondering… Yes, I shot that video using a smart phone. :-)

In case you’re wondering… Yes, I shot that video using a smart phone. :-)

Why have I started this site?

You know what, it’s a question that’s a bit hard to answer. Because it will need some “soul-searching” on my part. :-) But I’ll try my best to answer it—as faithfully, and as briefly, as I can…

I’ve been with “The Techno-centrics”.

- equipment,
- gear specifications,
- what’s “latest” in the video production market,
- different “bells and whistles”,
- the war among “fanboys” of gear manufacturers,
- and so on.

And if you hang around with them, you’ll feel that it is this “mechanical” thing that consumes them. It’s their favorite topic.

I’ve been with “The Swashbucklers”.

They are people whose “vanity” you can smell, from the way they carry their gear and move.

It’s as if, their expensive stuff, makes them so great.

And if you happen to shoot beside them, in an event, you may get that snobbish look.

I’ve been with “The Buck-chasers”.

Guys who entered video business, even if they lacked real passion for making video presentations.

They did it “just for money”.

And if you’ll take a look at their work, they’re fond of using fancy effects, and unmotivated camera work, that add nothing to the video’s story.

Typical presentation looks like a slideshow of random images from a photo shoot. Often with music, and some flashy graphics, which they add to raise the “value” and the price of their video.

And you know what? I’ve seen individuals who are combinations of “Techno-centric”, “Swashbuckler”, and “Buck-chaser” attitudes. :-l And there are websites that seem to only cater to these folks.

I believe, it is the HUMAN aspect of video production that matters most.

I believe that, what defines you as a video creator, is your act of…
- showing up in the process of making videos, so that
- you experience the challenges of—making it engaging, and meaningful—to your human viewers.
… Not the tools that you happen to own and use.

I believe that, whether you want to make videos as a hobby, or as a way to earn money, you’ll do much better if you’re operating…
- from the stance of a communicator, than
- from the tinkering of a technician.

I’ve started VideoAuteur.com to reach out to like-minded individuals. “Everyday” people who may share the same belief.

But they’re NOT alone. There’s a place in the Web, that offers them a different conversation, that they may be looking for—the human side of video creation.

This place… I dedicate to them...

This place… I dedicate to YOU...

Video Auteur is here to help you make video presentations that communicate and connect. The kind of videos that your "human" audience would want to watch.

It talks to you about…

The videos you make, don’t have to be serious, heavy, or commercial. They can be fun, light, or personal as well. But all are meaningful to you, in their own special ways. :-)

And, by the way, you don’t have to be the like of those “auteurs” in the film making industry. I only use the French word auteur in a loose manner… to mean, “someone who creates something”.

So Video Auteur simply means, “a creator of video presentations”.

My love affair with “motion picture” and “video creation” started when I was taking cinema, and TV production classes in college.

I fell in love with sample films that were shown to us. Great films from European, American, and Asian cinema.

My group mates and I made a documentary. I wrote the script for it. My first involvement in video production.

After college, I worked for a non-profit organization that did public service. I wrote scripts, shot documentaries, and oversaw the editing process…

To make sure our audience gets our messages clearly.

Of course, I had other jobs that had nothing to do with video production. But life is good! I still ended up with my passion for making videos…

For several years, I also worked as a corporate videographer and writer for our city government. You would see me in the field shooting community events… 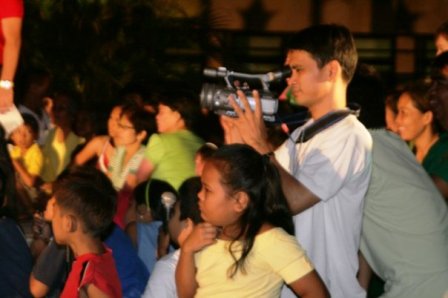 Photo of me by Isagani Sampang. 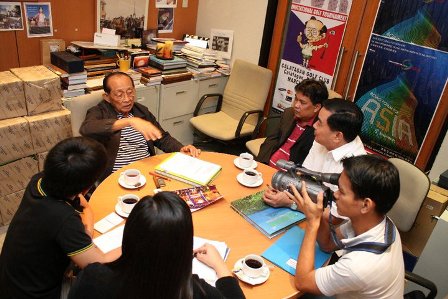 With Former Philippine President Fidel V. Ramos, right in front of me. During a round table discussion. Photo by Elgene Bautista.

Out of those materials, I wrote and produced video presentations. Both for internal corporate use, and for our local program at a cable television.

Time came when I had to leave government service. A new administration came in, and brought their own group of people to govern the city.

But I still do what I love to do—making videos for humans. Now, as a small freelancer.

I cover different events. From kid parties, to birthday celebrations, to debuts. 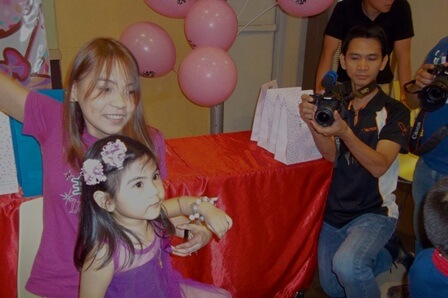 While shooting a children’s party. Photo by Jessica Motilla.

From reunions, to religious ceremonies, to weddings, even funerals. ;-) 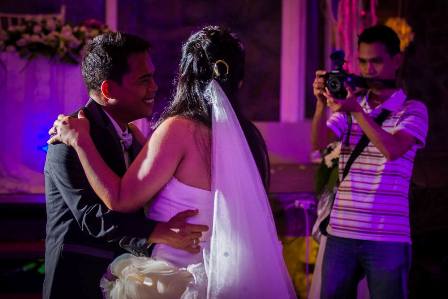 While filming a dancing couple. Photo by Ting Cunanan.

I also do some music videos, corporate gigs and other paid projects that need customization. 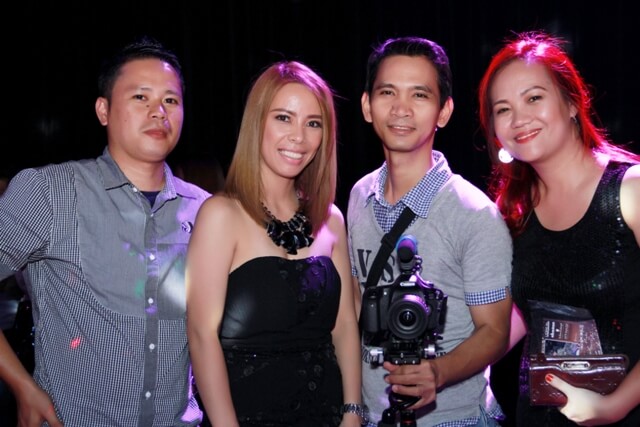 With some key persons of a famous salon. Photo courtesy of Aaron Galon. 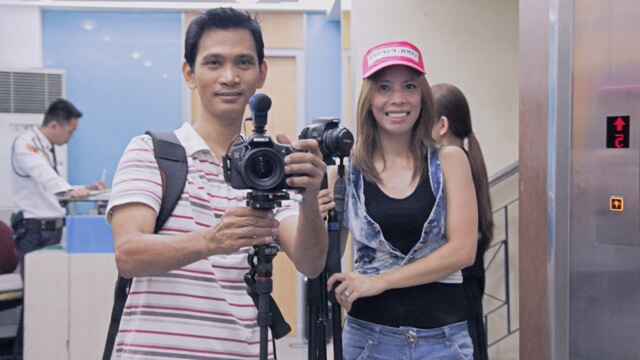 A selfie with one of them (done in front of a mirror), just after a music video shoot for their company.

Quick Facts About Me Relevant to Video Production and Communication 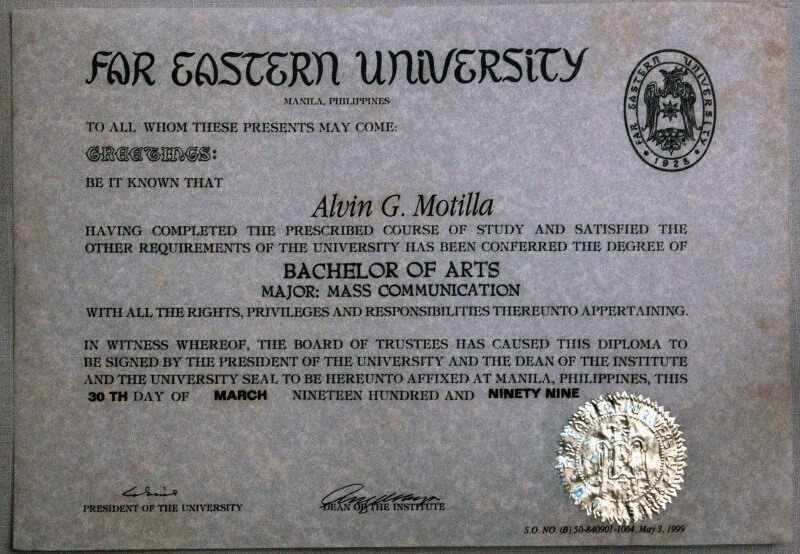 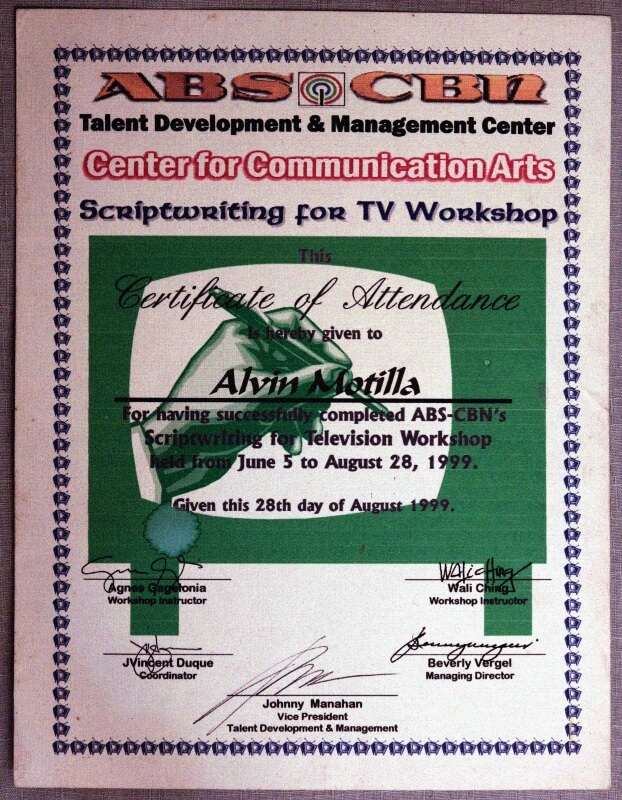 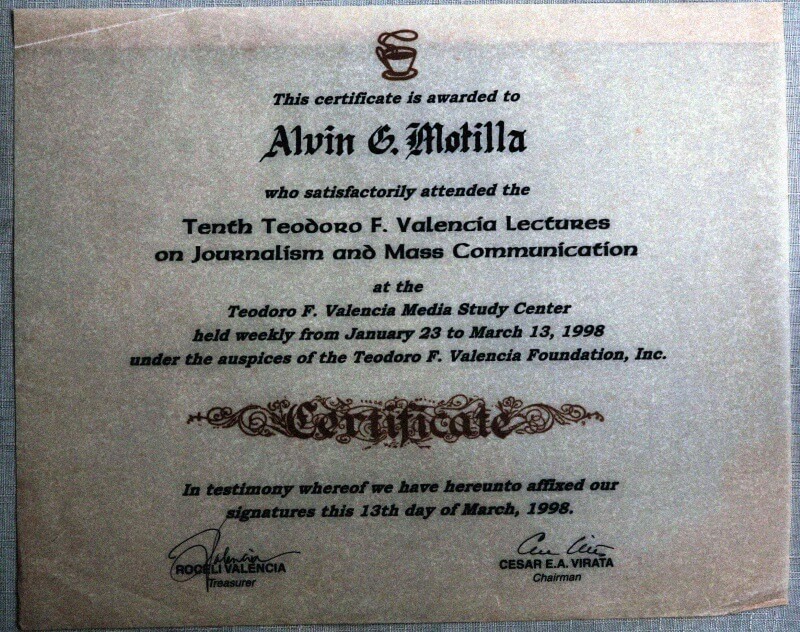 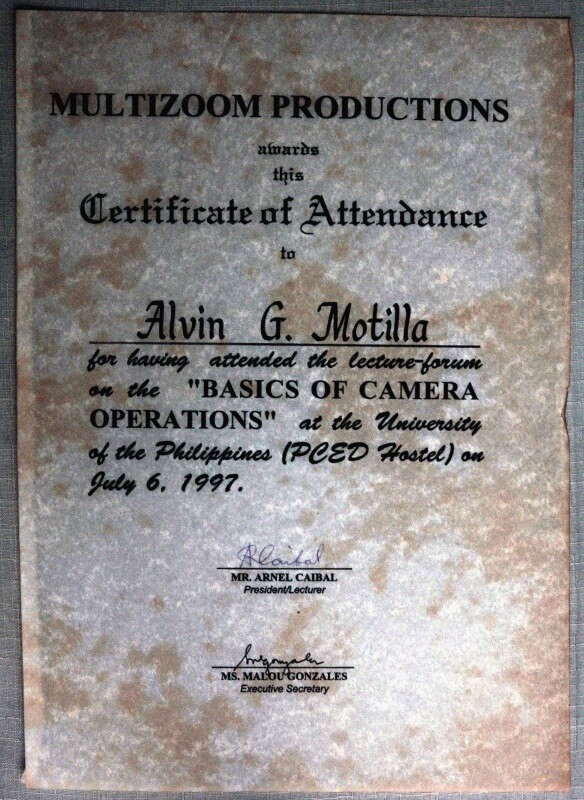 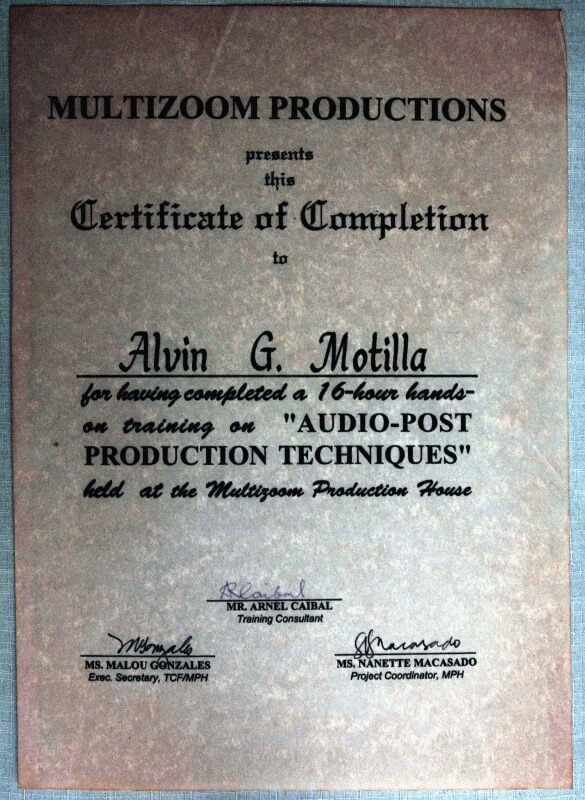 AIMM Refresher Workshop on Writing the Effective Press Release
for Radio, TV, and Print and Feature Story, Facing/Handling Media,
and How to Conduct a Press Conference
Association of Information Officers in Metro Manila (AIMM) and Philippine Information Agency (PIA)
October 6, 2011 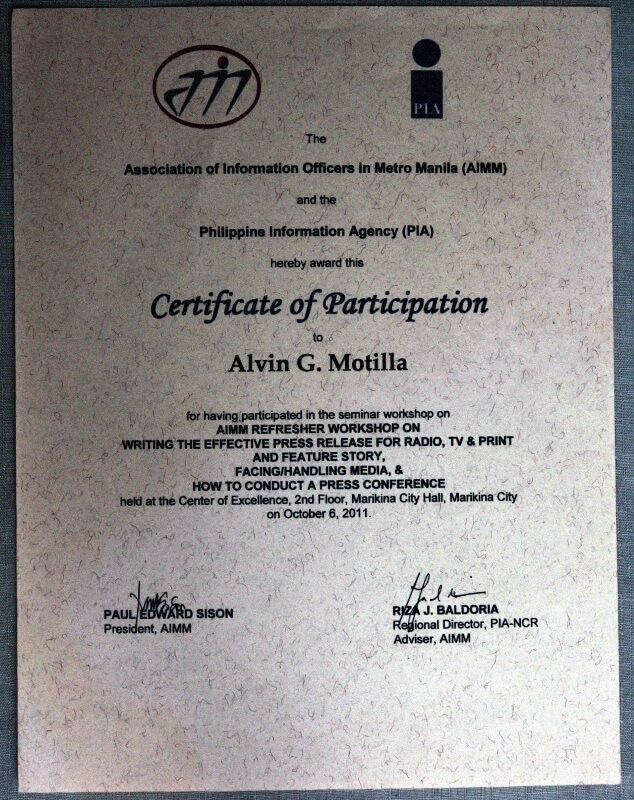 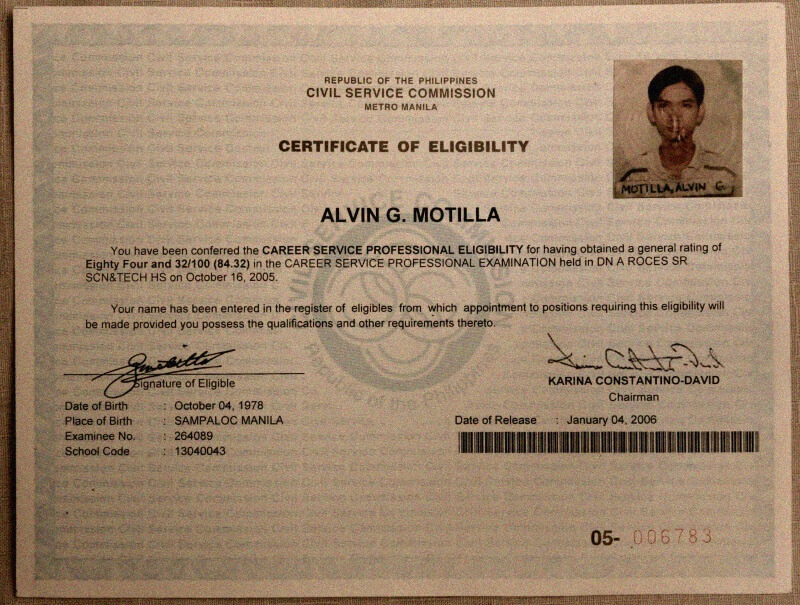 What do I hope for VideoAuteur.com? 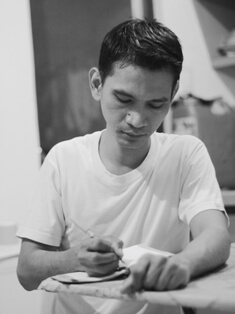 I hope that Video Auteur keeps on helping you, in your own video creation “journey”.

That’s why I keep on thinking... planning... writing... editing... and publishing articles that, hopefully, will matter to you.

But here we are—in this very place of the Web. Fascinated with the connecting power of great videos. 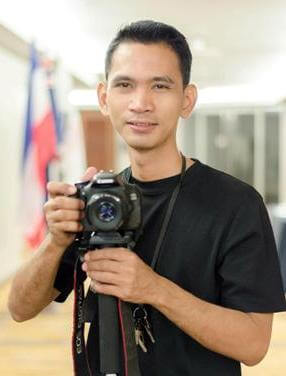 P.S. If you have something to tell me, or ask about, click here.